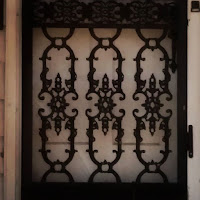 I started this project in 2015 when I began driving through South Peoria neighborhoods regularly. I have always liked the houses in that part of town, which primarily date from 1900 to 1940 along the Garden and Lincoln streetcar lines, in a very typical pattern for a Midwestern streetcar neighborhood. It's an extremely dense human environment. (Click to see a 1920 map of streetcar lines in Peoria. The "L" and "G" lines are on in the Southwest quadrant of the map.)

I am researching a more complete history of these neighborhoods that I hope to post soon, working through historical maps and government information about its development. Briefly, while some of the area was open to African-American home buyers, the majority of it was a white, working-class neighborhood and African-Americans were "redlined" out until the early 1970s, despite Peoria's "open housing" city ordinance that officially desegregated neighborhoods in 1962, and the desegregation of the city's schools in 1967. Most of the residents were employed by Caterpillar, which was an order of magnitude larger than the next largest employer in Peoria in 1920s through 1940s.


Today, South Peoria is 59% black, 28% white, and 7% Hispanic, according to the census and using the 61605 zip code as a proxy for the area. Only 5% of adults have college degrees; 23.2% are unemployed. The majority of the homes are rentals -- 61% -- and slum lords are a problem. The median income in 61605 is $19,750. Close to 20% of the population are legal resident aliens or naturalized citizens, the vast majority (92%) of whom are from Mexico. About half of households are below the poverty line; however, about 93% of elementary school students are below the poverty line, so younger families are hit considerably harder.

Peoria has multiple beauty neighborhoods with fantastic old houses, particularly the Moss-Bradley area and the Randolph-Roanoke Historic District, which are full of gorgeous old whiskey mansions. The Uplands, across from Bradley University, is popular among professors and professionals and has beautiful, well-maintained, and surprisingly affordable older houses. Grandview Drive features some of Peoria's showstopper mansions of a more recent era. But all of these neighborhoods are well-photographed, and -- other than the Uplands -- they're mostly grand homes for grand people. They're featured on the Parade of Homes and holiday decorating tours and whatnot; they appear on calendars. It's well-trodden ground and, as an amateur photographer and amateur architecture buff, I have nothing of value to add.

South Peoria is full of densely-packed urban neighborhoods. Despite consisting almost entirely of single family homes, schools are less than a mile apart, and there's a church or a bar on just about every block, because the density supports both neighborhood taverns and grassy yards. As a long-time supporter of New Urbanist zoning codes, I am fascinated by these patterns of development. 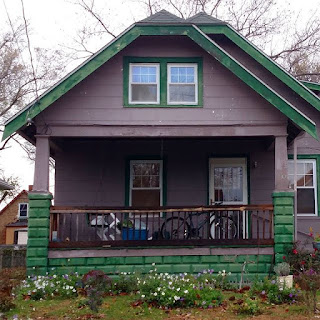 I'm also fascinated by the hundreds upon hundreds of houses, built by regular families, for regular lives, and adapted over 70 to 100 years (typically) for the changing demands of the neighborhoods and its residents. These are not fancy homes designed or renovated by architects; they were built by large-scale home builders, working in local vernacular designs popular with buyers of the era, constrained by small budgets, and renovated by average people a dozen times over the past century according to their own taste. Some are meticulously maintained to the exact historic fashion in which they were built; others are renovated with whatever's cheapest and newest; others show the changing tastes and fashions of vernacular architecture in the area in the past 100 years. (The Prairie Style influence on porches is particularly notable, and visible in renovations all over Peoria from a variety of eras.)

I'm fascinated because so many of the houses were built during the transition from hand-crafted houses where every part was made by craftsmen to the machine era where pieces of the house were manufactured, often hundreds of miles away. You can see transitions in the technologies of framing and roofing, which allow simple squares and rectangles to become complex polygons with many interior and exterior angles.

While not all of the houses, buildings, and infrastructure that I photograph are in South Peoria, the vast majority are. I may expand into other areas of the city as time goes by. I make sure to tag pictures that aren't taken in South Peoria.

Are You Photographing Urban Decay?


Not on purpose. But, unavoidably, yes. I chose South Peoria because I love the physical plant of the neighborhood and I think it's a fascinating, vibrant, beautiful neighborhood. But it is also a run-down neighborhood where the majority of single-family homes are rentals, the majority of buildings are noted by the tax assessor as being in less-than-good condition, and the majority of residents live in poverty.

I'm not trying to take pictures of "Whoa, look at this thing falling apart." I'm taking pictures of "Whoa, look at this awesome thing!" but unavoidably some of the awesome things are, in fact, falling apart. Occasionally the decay in itself is interesting, instructive, or beautiful, but my primary goal is not for people to gawk at a run-down neighborhood; it's to catalog and share the aspects of that neighborhood that fascinate me.

What Kinds of Things Do You Find Fascinating?

In addition to the general categories I've talked about above -- vernacular building and renovation, urban density, mixed-use zoning -- right now I'm interested in beautiful or unusual paint jobs, use of texture, porches (especially Prairie-style), accessibility renovations, pretty infrastructure, tiny houses, and homemade signs. I'm trying to find houses in every color of the rainbow; right now purple has me stumped.

When I have errands in South Peoria, I leave 5 or 10 minutes early and take side-streets. Usually I have my 4-year-old with me in the car; sometimes I also have my 6-year-old. We drive around and look for interesting things; when we spot them, we pull over and either take pictures from inside the car or I jump out and go take pictures on the sidewalk. I try not to interrupt anybody or get in anybody's way. Sometimes we drive a particular street several days in a row for a particular picture, trying to catch good light or get a shot when a big pickup truck isn't blocking the view, but mostly we're all about serendipity. Sometimes I poke around Google Streetview or Peoria GIS looking for specific traits if I've gotten interested in (say, homes built before 1904) so I can make a specific trip. The biggest problems for my photos are the incredible density of utility wires and chain-link front yard fences. Also sometimes trees.

I just use my phone to take pictures (android). Most of my pictures don't use filters, but sometimes I increase the brightness if I got a good but dark picture. I also use the "vingette" feature if I have a cool detail surrounded by busy nonsense. Sometimes I use the "Lo-Fi" filter, especially if I get a picture that is kind-of old-fashioned looking and I want the nostalgic vibe. I also like "Clarendon" for brickwork or stonework or woodwork where I'm trying to highlight the carving or subtle pattern, since it heightens the light and shadow and flattens the color within them. I get super excited if I happen to take a picture I can use "tilt shift" to enhance, because I love tilt shift.

What Have You Learned from This Project?

1) Even such permanent structures as buildings are incredibly transitory. Several times I've gone to photograph something a couple days after noticing it, and it's already gone by the time I get back -- someone's changed the shutters or repainted a crazy paint job or repaired a sidewalk crack. Since I've started paying attention, it's amazing how quickly buildings change.

2) Wind is terrible. We had a couple of wind storms here in Peoria right when I started the project and, wow, once you're paying attention, wind does a LOT of damage. Like, a LOT of damage, especially to older homes, especially if they're not well-maintained.


Why an architectural photography project?
In which I get poetic about Chicago

Chicagoans are native architectural nerds. It is probably the best American city for architecture, and residents know it -- one of the top tourist recommendations on every Chicago tourism website is architecture tours, whether on foot, by bus, by boat, or by Segway. It's a terrifically democratic art form in Chicago, where literally everyone from the bankers coming in from the North Shore to the homeless men selling Streetwise want to offer your their opinions on the newest proposed skyscraper if they see you reading Pulitzer Prize-winning architecture critic Blair Kamin's front-page dissections of the city's architectural future. (I remember once having a middle-aged banker in a bespoke suit say to me, "Isn't that the ugliest thing you've ever seen?" when he saw me reading such an article; two minutes later, a Streetwise vendor saw me with it and said, "That thing needs a fuckin' spire." He was correct -- it desperately did.) The artworks are massive and on constant public view, offering Chicagoans an incessant gallery of spectacular art to argue about, and the pride of knowing that the most important American architectural movements of the post-Civil War era -- Prairie Style, International, Commercial -- and many of the innovations that made modern buildings possible -- floating foundations, skyscrapers, balloon framing, wide-span steel -- are native to Chicago.

My father is a typical casual Chicago architecture nerd, terrifying us by craning his neck crazily while driving in the Loop to demand we look at and admire Chicago's fantastic buildings; all of my memories of early trips into the city are punctuated by staring up at brightly-lit skyscrapers while sleepily riding in the back of the family car on the way home from a day trip. So it's only natural that I have the same intense pride in Chicago's architectural legacy as other Chicagoans.

I've been fascinated by architectural plans for as long as I can remember, beginning with a children's book that I don't recall except for the overhead "plan" of the rooms to help the reader understand the action. I spent several years drawing "floor plans" of elaborate and impractical clubhouses, populating them with little people made of scraps of paper, which drove my mother crazy.

As I've gotten older, and bought my own home, my interest has only increased, and I follow blogs on modern home design, tiny houses, and (I confess) Ikea hacks. I'm a sucker for Buzzfeed lists about DIY decorating. I like to read books on the architecture of homes. I have two little boys who are obsessed with city infrastructure like streets and tunnels and railroads and sewers, and I got sucked in by that, too.

I was casting around for a project this year, something to keep me busy, and I was constantly wishing someone had photographed and written about the "regular" housing stock in Peoria. Eventually it dawned on me that nothing was stopping me from doing that, if that's what I was interested in learning about! So here you have it.